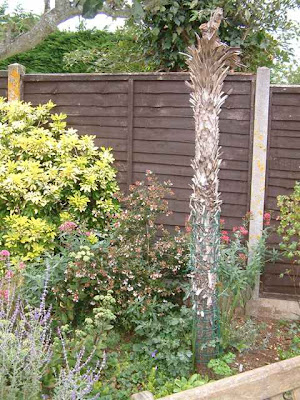 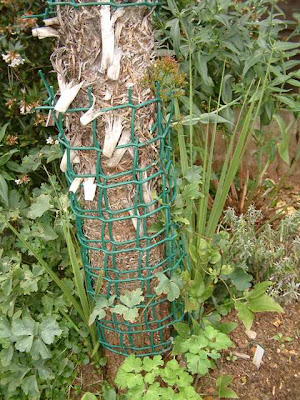 String up the bunting, let those party-poppers fly, it's celebration time.
Like a lot of peeps in the UK our Cordyline, which was about 7 feet tall, took a hammering in the extremely cold winter & lost all its leaves. The stem remained fairly solid so I didn't chop it down but started to train a clematis to grow up the totem-pole as it was quite a 'feature' in the garden.
The other day I noticed that 2 new shoots have appeared on either side of the base...Rejoice. My mother-in-law's 2 foot tall pot-grown version has also started to re-shoot.
Off to have a cocktail sausage & cheese on a stick to celebrate.
Posted by Jane

I love it when plants surprise us like that! Makes up for all the times they die for absolutely no reason at all...

The Garden On Loch Ness said...

Welcome to blotanical :) Pleased to discover your blog and i'm glad your Cordyline is doing ok. Best Wishes, Cat