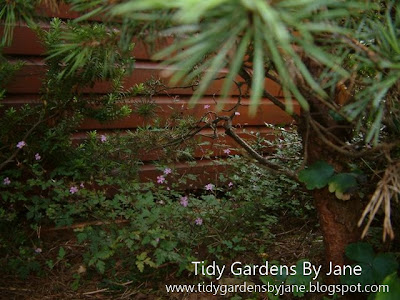 Cranesbill - Herb Robert
I've noticed just recently that gardens centres have started to sell Cranesbill-Herb Robert in the Wild Flowers section. If only I'd known there was money to be made from these Cat Wee smelling critters,  I'd have potted up all those that had taken refuge in my garden and all the gardens where I'm employed to get rid of them & retired with the procedes to the Bahamas.
I have no idea where they came from, never had them up until a year ago, I thought they were weeds and now I could kick myself at the fortune that's gone up the local recycling centre ... DOH
So now I've been leaving them if they appear, the leaves are quite dainty with pinky/ mauve geranium flowers. Ours have all appeared on the 'shadey side' of the garden so I guess that's where they're happiest.
Apparently they're used in herbalism for toothache & nosebleeds, so with that in mind ... next time I stand on a rake I shall use Herb Robert to mend my wounds.
Posted by Jane

Dear Jane, I suspect there is some conspiracy here. Who is Robert? How has he influenced the garden centres to start to sell him? Where is he now? Is he in the Bahamas? What is the source of the antipathy between you and rakes? I hope you don't stand on a rake just in case Robert does not help. cheers, catmint