Buy One ... Get A Zillion Free 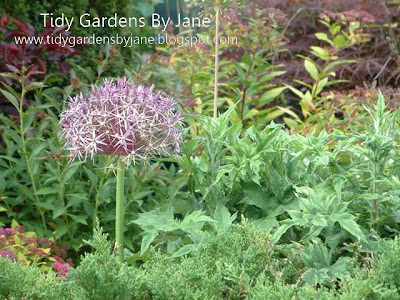 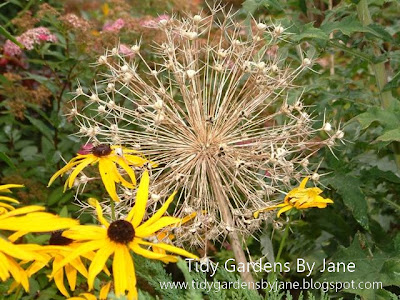 Well ... at least that's what I'm hoping for.
Usually these fabulously big Alliums disappear in our garden during the much awaited flowering stage. I say 'disappear' but I'm beginning to think they're either accidently pruned by a 'Secateur-Possessed-Maniac' or deheaded during a frantic game of football.
This year, just one has survived the rigour of family life and managed to stand like a giant star in the flower-bed. Threats of death (or worse) if anyone so much as looks at it, let alone touches it, seem to have done the trick and it's now produced loads of seeds ready for me to sow.
I have no idea if they'll come to anything but isn't that half the pleasure of gardening.
Another week of tidying gardens beckons, have a great one ...   :0)
Posted by Jane

How fun! Uh-Oh, I think I cut mine down! I'll have to try to remember to let them be.

That allium is one of my favorites. I got my original bulbs years ago the the NY Botanic gardens.I've never planted the seeds but I have had side bulbs form. I hope you have good luck. They are spectacular in the garden!

Football and gardens dont mix too well...niether do dog bones and dogs...grrr..

Busy with work, keeping family in tow, all behind us now, well thats what I thought until our fantastic grand children started to arrive. Alliums are fantastic, hope you have good success with raising the little ones. Go on, find time to read a good book.

Beautiful! I hope the death threats work, and it makes lots of baby alliums for you :)

I tried planting alliums a couple years ago, but the area where I planted them was too full of clay and they rotted. At some point I'm going to try again with a better draining site - they are such pretty plants!