Patience is a Virtue

About 14 years ago we bought a peony for our new home & garden.
We were seduced by the label dangling on its spindly stems, a vision of the future, of things to come. 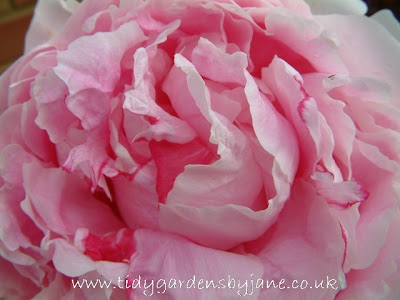 We planted, we watered, we tendered the soil, we talked endlessy to it's spindly little stems that peered through the soil each year but nothing....a leaf or two maybe (if we were lucky) .... but never the minutest hint of a bud.
After 11 years of begging the 'damned thing' to 'DO SOMETHING!!!', we took drastic measures.
We dug it up and moved it to the worst part of the garden, where the soil is pretty much the kind of ground you find on new housing estates, bits of rubble, dry, desperately in need of some attention.
At least nearer to the house I could keep a closer eye on it, not have to walk so far to yell at it. 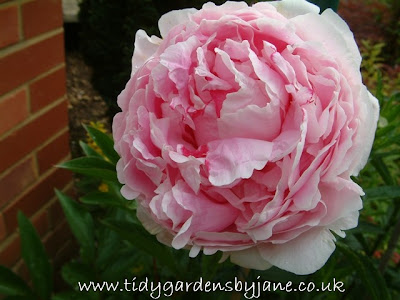 Well you could knock me down with a feather boa & call me a fish sarnie!
The following year (now 12 years old) we had a couple of blooms, weedy, weak ones...but blooms I tell yer!!
Last Summer in its 13th year, the stroppy teenager produced the beautiful swan of the Peony World in abundance. These photo's were taken then, I'm hoping for even better this year.
I guess I was just a little impatient.
﻿
Posted by Jane

Email ThisBlogThis!Share to TwitterShare to FacebookShare to Pinterest
Labels: Spring

Oh! Yes..patience is a virtue, all good things take time,after 2 years I would have ripped it out, but you showed your dedication, and now your beautiful teenager is all growing up...gorgeous flower..

Gosh but you are a patient. Not sure I would have given it quite as long as you; perhaps only ten years.

Oh, what a beautiful bloom! It looks like your long wait was worth it Jane. I've never had a peony, but I'm going to look them up to find out if they will live here. I enjoyed your entertaining post ... made me laugh (the part about yelling at the peony). I have some tall bearded irises I may start yelling at next year. Thanks for sharing your beautiful photos.
All the best! :-)

How amazing plants are! I can't believe how patient you were... but after it being so mute, aren't you happy! How easy to be forgiving once it decided to give in... It is beautiful! I wish I can have peonies... they wouldn't last at all! happy gardening!!!

Oh my, I just planted three bare root peonies last fall - of which only one has come up. This could be a long wait...

At first I read "About 14 years ago we bought a pony..." and I was imagining a label attached to this miniature horse, but then I got it. Just as well, it takes a lot more than 14 years for a pony to flower :)

What is it they say, things come to those who wait, but that was quite a wait. Well done. I've got a couple of reluctant to bloom peonies. Mmm, might give them the same treatment.

Abuse. Gardening is all about abuse. We tell ourselves that we're nurturing and cherishing and babying, but most of my happiest plants are the ones I've forgotten about... I'll have to try yelling, since it's worked so beautifully for you. You are one patient gardener!

That's typical isn't it - plants that do the opposite of what they are supposed to do. Our peony is totally in the wrong place and flowers beautifully, except you can't see it as it is hidden behind a shrub.

I just bought my first peony, with visions of lovely pink scented blooms in spring. Guess we'll make that spring 2025 then? (Or maybe I'll just start yelling at it now.)