A Wander Around the Tidy Garden 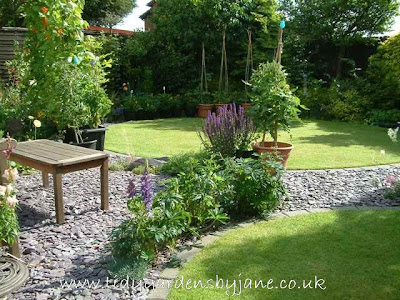 Welcome to the Summer Tour of the Tidy Garden. 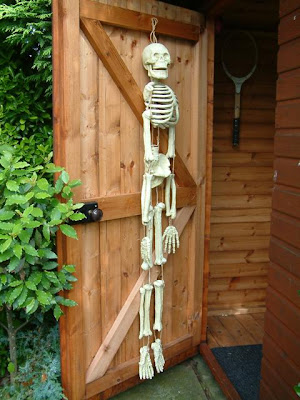 Refreshments will be served at the entrance by the butler. 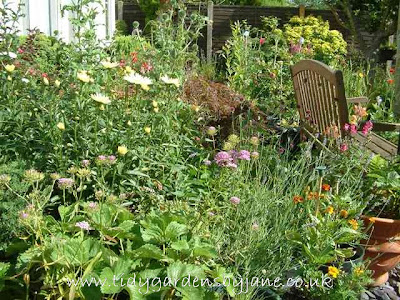 It's been a funny ol' year for most of us here in ol' Blighty.
Since the drought declaration back in April it's rained almost every day. For some poor souls it's rained too much and their gardens have flooded. The Tidy Garden has been lucky and although not as 'flowery' as previous years it's certainly 'blossomed' and is 'officially' full to the brim (although I can always find a space should that 'I can't live without that plant' occasion arise. 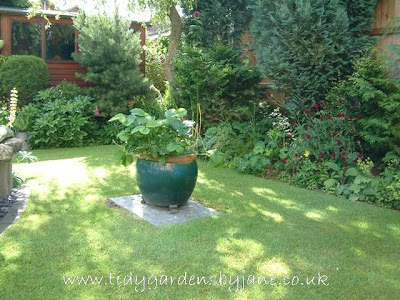 The 'shady' side (above) has for many years been the weak area of the garden. This year it has flourished, everything is bigger & better than ever before. Even the strawberry plant (in the pot) has 'fruited' it's little head off and it's been a race between me & Mr Blackbird as to who gets to the juicy fruits first. 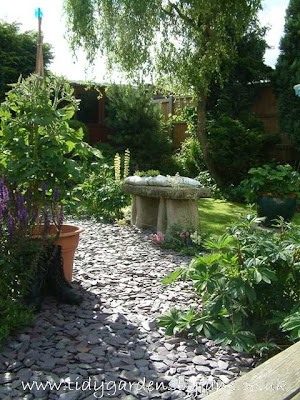 The lettuce grow-bag hasn't really performed as well this year...or was it my failure during all the wind n' rain, when the last thing you fancy for tea is salad, to harvest the baby leaves?
Maybe next year I'll grow a crop of hot stew vegetation. 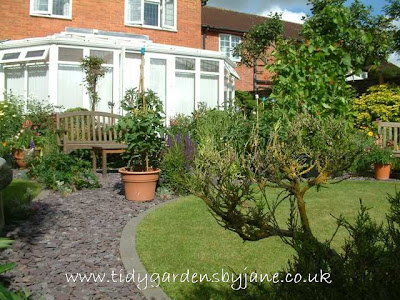 The sun has tried to come out today, although as I scribe dark clouds loometh. What little flower colour we do have is drowned out in a sea of green when the sun goes in. 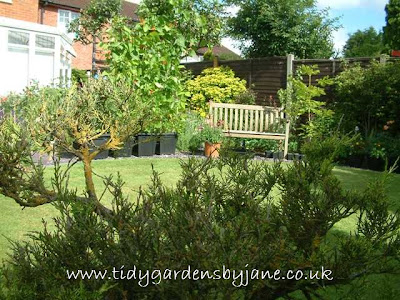 My mystic view through bonsai'd conifer for dramatic effect failed! 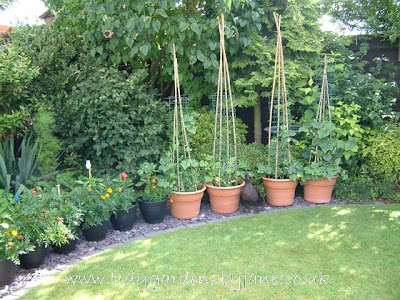 The cucumbers (in the brown pots) are hanging on in there and we've had 2 six inchers so far. Didn't dare to let them grow any longer as I thought at this rate all the plants energy was going to go into these 2 and there'd be no hope (or summer left) for any further fruits. This seems to have paid off and several other 1 inchers have now appeared.
The peppers meanwhile (in the black pots) have been a disaster. Glad I popped a Marigold in each pot for a bit of colour as this would just be a boring line of of black pots. Seems others have had the same failure rate so I'm not too disappointed. 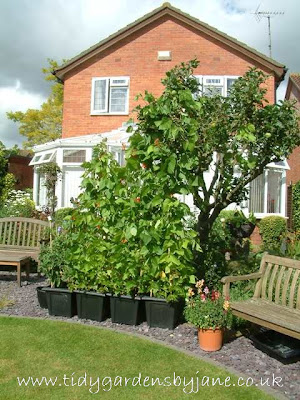 However...the runner-beans have been a HUGE success as the stems make their way up in to the cooking-apple tree. 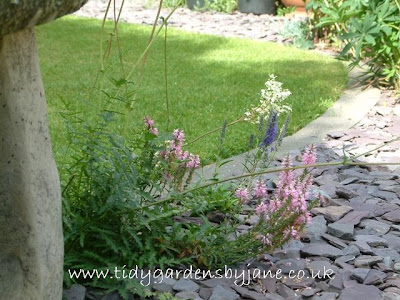 A muted splash of colour against the slate path. 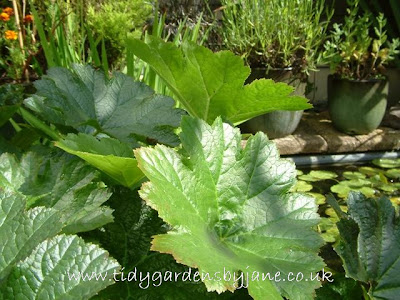 The pond has sprung back to life... 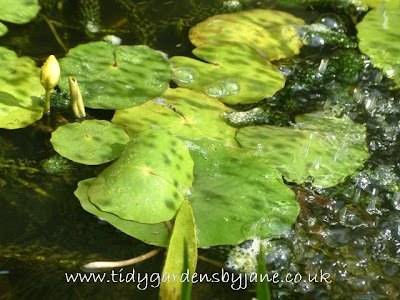 ...after a whole year of green-soup murkiness... 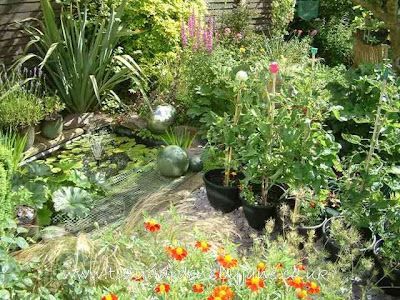 and yes....a splash of colour...those marigolds grown from seed that are supposed to be 6 inches short are now almost 18 inches tall! 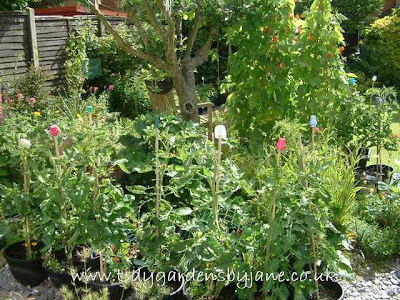 We won't talk about the tomatoes...Grrrrrr....about 25 plants have so far produced 4 green tomatoes. Guess I won't be supplying Tesco this year unless they can find a use for the lush leaves that did grow (grrrr...again!) 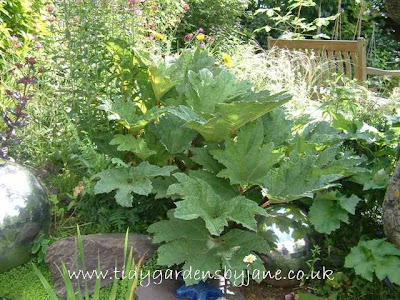 My prize possession Gunnera, is still no where as big as I hoped it would be but I'm a patient woman, another 10 years won't hurt!
Hopefully with a little bit of the hot summer sun that's forecast this week, some of the colour will return to the Tidy Garden.
Have a groovy weekend everyone and viewers from the UK get your flip-flops & knotted hankies poised...summer's coming!
Posted by Jane

Wow, absolutely fantastic journey through your beautiful gardens! From my point of view, everything looks lust and gorgeous!

I enjoyed my wander around your lovely garden, Jane! The "butler" was very cute. Love those 18 inch tall marigolds. I haven't come across any that color before ... very striking color. Stone paths like yours have been added to my wish list. I'm glad summer has decided to visit over there after all. :-)

Ah chez Jane looks tres chic - however, am worried about your prize possession what???? I think I've heard that mentioned on embarrassing bodies!!! ;-) Ah, wish you were closer to come and sort out my very untidy borders. I seem to have gone from tidyish to very untidy with lots of greenery covering plants - pah!! I really should read the labels instead of thinking 'oooh pretty!!' plus I dont know what half of them are called so I cant investigate on what to do with them xx

Your yard is gorgeous Jane! Our weather here has played havoc with the garden too....first we were drowned & now we are baking! No happy medium! We have a big flower show on Aug. 13 but all my flowers are weeks early & will be past their prime by then...guess there won't be any ribbons or plaques for me this year! Happy gardening!
Hugs, Renee

Oh Jane, That garden is just marvelous.. I want wander around and mingle in it... I love that your cukes are coming along.. I love the water garden, the pond is where I would spend a lot of time reading and and taking in the sunshine and fresh air, Bravo!

Their are no failures in gardening, just plant research...

Hi Jane,
amidst all your fun and laughter that make me laugh, i can see you are a whizz in the garden and what a beautiful one it is too - well done you xxxx
hugs
suzie qx

I'm having to be very patient with my gunnera too, Jane. I've been told it takes three or four years before they attain 'a size.' So, hang on in there. That butler looks shifty and a real shirker. Get rid. D

Nice to see some shots of your whole garden it is looking lovely and so 'tidy'.

Thanks for the stroll in your lovely garden, it looks very nice, despite our strange weather this spring - well I don't really feel we have had proper spring, let alone summer! But now we might actually get a bit of nice weather, hopefully it will last more than a few days. Poor butler, he seems to have suffered in the bad weather more than most of us!

Thoroughly enjoyed the wander around your tidy garden Jane. Oh god the cats just spewed her guts up and Myras in the bath, should I just leave it, better not. Oh, know exactly what you mean about those plants which you just must have, bye for now.

Oh Jane you have the most amazing green thumb!!!! What I woulden't give to have you here to tend my garden!

I really enjoyed looking around your garden. Beautiful. And it's so tidy.
I don't mean to complain, but don't you think your butler could do with a good meal, just saying.

I really enjoyed the tour of your garden, Jane.
Oh to be in England when summer's here... Even if it is a wet one.

Thanks for the stroll, I needed that bit of a reminder of Summer.
How old is your Gunnera? - lovely plant!