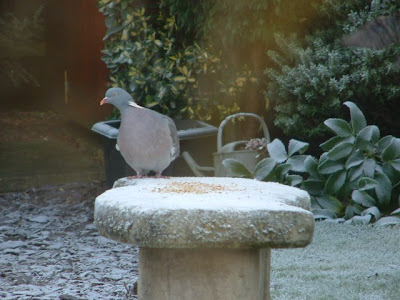 NOT!
This is the warning being issued by the RSPB following the unusual rise in bird obesity in the Hertfordshire area over the past 2 years. It appears that 'someone' (their identity is not being disclosed) has being putting out 'failed Christmas' cakes, that had been rejected by the building industry as house-bricks, to the birds in the North Herts area.
It seems birds arrive in gardens in peak condition... 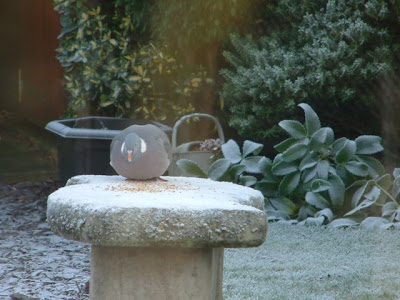 ...and then find themselves unable to take off, with chronic indigestion and requiring the assistance of the emergency services to air-lift them to the gym for a work-out having indulged in said festive offering.
Officials have been reassured that the cake offender, who is believed to be a cateringly-challenged female, about 21 years old (ahem!), lacking in height and with a thing for George Clooney has in fact given up entirely in her attempt to bake a Christmas cake and has been caught on CCTV this year purchasing a rather natty one from a Tesco supermarket. Despite this assurance, the public are still advised that she may be armed with a dibber or trowel so approach with caution...and if you're offered cake...RUN!!!!!!!!!!!!!!!!!!!!!!!!!!!!!!!!!!!
Posted by Jane

Email ThisBlogThis!Share to TwitterShare to FacebookShare to Pinterest
Labels: Birds

Hahahahaha, for the first few seconds I fell for it and even thought to check out the RSPB later.
For a few seconds though you had me! lmao.
Merry xmas to you and norman lol.

Ha ha - I think there must be quite a few cake bakers in the same category around here where I live, if the circumference of the pigeons are anything to go by! Hope the Tesco version was tasty, for both humans and birds alike :-)

Your blog made me smile :)
We have a rather tubby magpie visiting our garden. We call him Tubsworth - I do hope he doesn't get a complex and need a therapist!
I see you are as good in the kitchen as I am. My motto is 'WHY COOK WHEN YOU CAN BUY!'
Have a good Christmas!

I've had a flock of wood pigeons in the garden recently, sat in the tree, preparing to travel on their Christmas Hols. I've heard they're going to Hertfordshire for Christmas. It's a new migration thing apparently.
Merry Christmas, Jane.

LOL! I do believe the cake offender somehow made it all the way over here and into my kitchen (she's crafty). I'm having trouble taking off! xx

I love fruitcake. I might have been out there with Norman. Happy New Year.