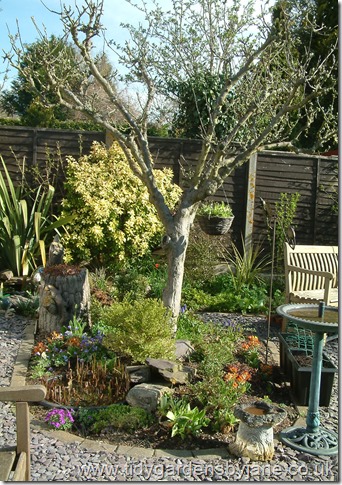 Following on from my post last week, I’d like to say that of all the areas of the Tidy Garden this spring that have had a makeover, this (The Apple Tree Bed) has seen the biggest. Mr TG would slap his hand (again) to his forehead, shake his head & give you one of those ‘she’s delusional’ looks while swirling the index finger on his other hand in a circular motion beside his temple. 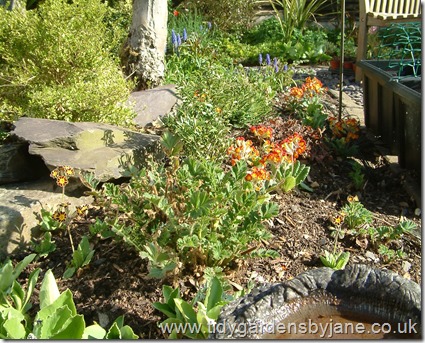 It’s not my fault…if a job needs doing or a bed needs revamping then I’ll go whole hog into it.
Now the Apple Tree bed, so named due to the ‘Cooker’ that stands centre stage, had originally been a feature bed, lined with grey bricks & coated in purple slate. That was back in the days when most of the garden was carpeted in an annoying shaped lawn that took for ever to mow. However, when the garden underwent its major transformation back in the summer of 2010 the grassy outline disappeared & slate paths took over and slowly, over time, the feature bed merged & slowly disappeared. 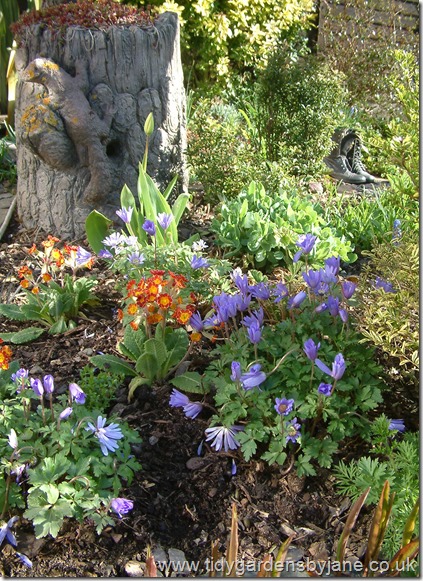 Like a woman-possessed, I’ve removed all the slate from the bed and dug up almost every plant (clearly NOT the tree!), divided clumps of Black Grass, Auricula & a variety of Polyanthus, which amazingly have taken to their separation so well that they’ve rewarded us already with a whole heap (technical gardening term I’ll have you know) of new blooms… 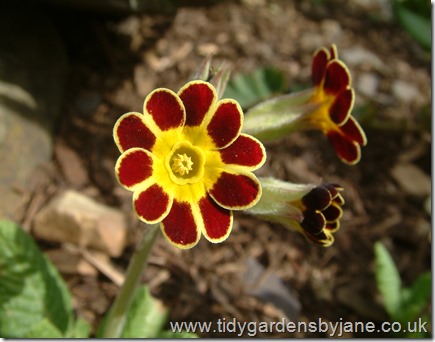 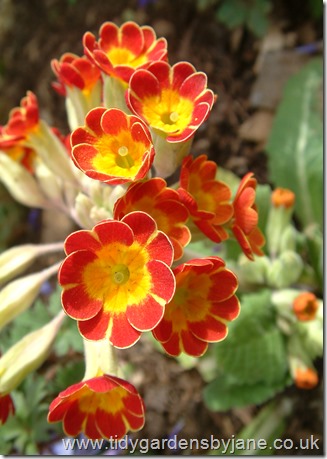 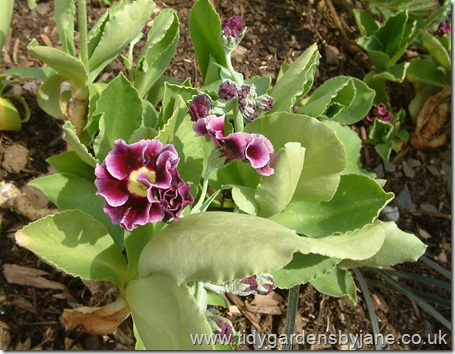 Mr TG made a ‘little purchase’ or two… 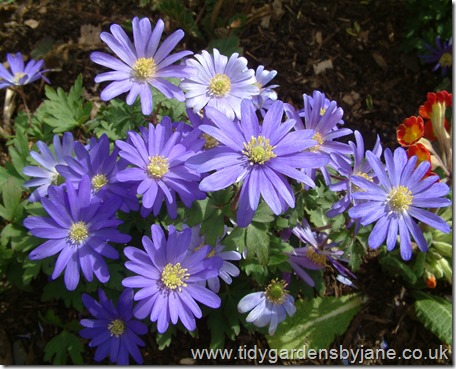 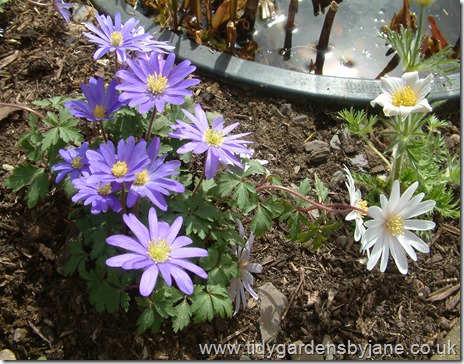 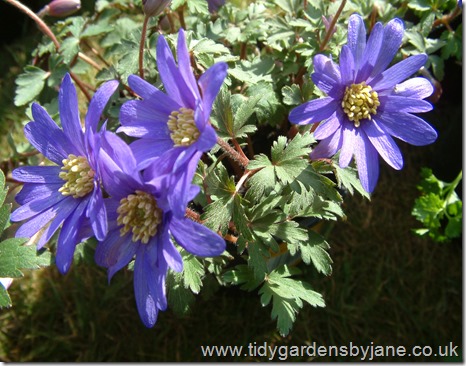 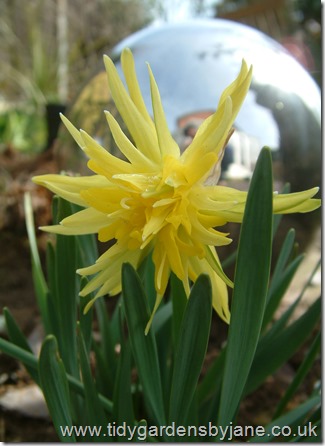 An old Narcissus ‘Rip Van Winkle’ has made an appearance. 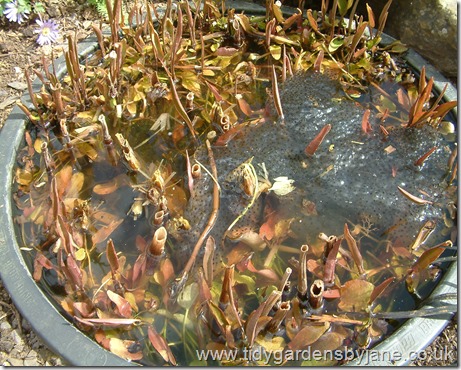 The mini pond (a simple pebble-pool sunk into the bed) was put in several years ago and is teeming with critters & is regularly used by Mr & Mrs Blackbird to cool their feet & wash their feathers. EVERY garden should have one of these, so easy to do…a hole, a simple plastic pond (this one was about £20), a few plants…oh and water always helps…and away you go. A  top up every now and again & chop down everything at the end of the year…but for gawds sake….DON’T put fish in it…they’ll fry! (no pun intended) Let nature find its way there. 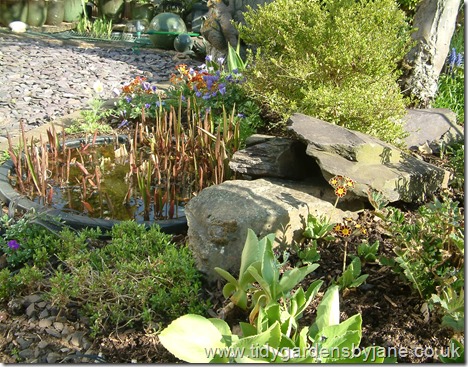 To complete the new look MR TG has indulged his passion for Geums & festooned the bed with more new plants ready for summer…a fiery profusion of orange, red & yellow…can’t wait! To complete the look I scattered a layer of well rotted manure just to hide those bits of slate I missed et Voila! That’s the Apple Tree bed this spring, back to being one of several ‘feature beds’…lots finally happening. The Japanese Anemone planted in this bed years ago is already starting to appear and what with Mr TG’s Geums…it should look A-mazing…if I say so myself!

Email ThisBlogThis!Share to TwitterShare to FacebookShare to Pinterest
Labels: Before & After

Mr. TG can't think you're too crazy if he's contributing so much to your new revamped bed! At least it's only a few flowers - the only plants Mr. Red House requests are trees, and big ones to boot! (He's still rather hurt that I wouldn't put in a giant Redwood, Weeping Willow, and Blue Spruce in our far-too-small lot.)

I absolutely adore your heap of Polyanthus blooms, and I definitely need to steal that mini-water-pond idea!

Sometimes you have to have a really good sort out rather than just fannying about. Your apple tree bed looks all the better for it and I am sure the plants will thrive there.

Oh wow Janey, how beautiful and peaceful! I love the idea of a little pebble pool but I can't get beyond 3 goldens fighting to get in and mosquitoes laying their eggs! Wish you lived close by, you'd be my garden guru!

Removing all the slate was a big job! But I love the 'after' look. And I especially love the little pond. I bet it is so satisfying to see the birds standing in it.

If a job is worth doing it is worth doing well :-)
Great work! Love your collection of spring flowers, never heard about wind anemones, I have anemones blanda mix but they are not as tall as yours. Great colours on your Polyanthus too. Isn't it good we finally have spring?!