Square Foot (….and a bit) Gardening

For a long time now I’ve yearned for a proper veg patch. For years all vegetation has been grown in pots dotted here n’ there…..there n’ here….oh….and over there too.
With a years worth of gardening mags’ to trawl through during the long winter evenings, I discovered Square Foot Gardening. Legend has it that SFG was invented by a jolly decent chap called Mel Bartholemew (his website will tell you the story of SFG).
Now regular stalkers followers will know that the Tidy Garden has only just recovered from its latest re-vamp, so broaching the subject to Mr TG about ‘transforming’ the garden again so soon after its last transformation (6 weeks ago!) was going to be a delicate operation.
But my womanly persuasive skills convinced him that SFG could work in the Tidy Garden & that losing ‘some’ of the Circular Lawn wouldn’t be as bad as envisaged! 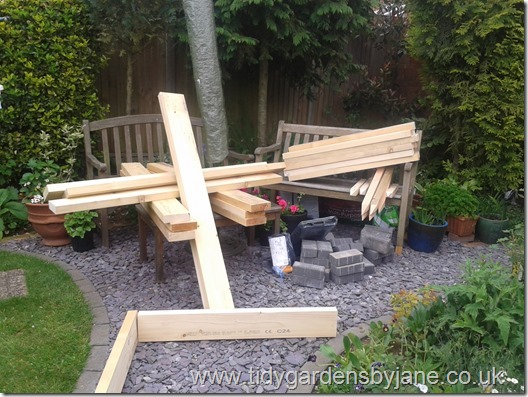 Now, I have to say, loads of research was carried out prior to the arrival of all the materials above. Our local DIY store refused to cut the treated wood we originally chose, on the grounds of health n’ safety. It was to do with the copper content in the preservative that would be exposed in the sawdust. Further research on a selection of ‘grow your own veg’ sites & forums also suggested that in days of old, wood preservatives contained arsenic, copper & chromium. That was all banned back in 2003, but apparently it does still contain copper & some say it could still could leach into the soil and as yet no one is sure of its long term effects on human health. 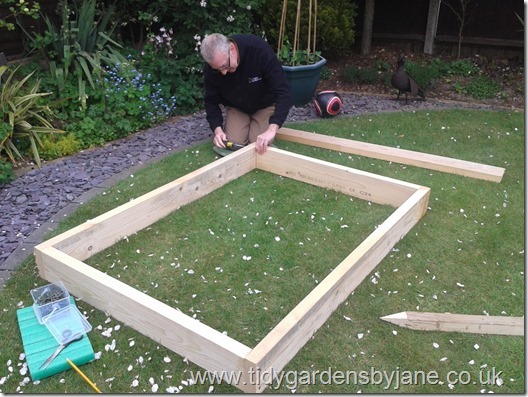 So with all that scary stuff in mind, we decided that we’d take no chances (pointless trying to be healthy & organic and risking an unknown) and purchased some uber-thick-non-treated wood (double the thickness sold by many ‘kit sales folk’). At this point I’d like to give a big shout out to the terribly nice people at Chas Lowes in Knebworth who not only told me about TRADA (Timber Research & Development Association) but who also cut my timber into bite sized portions (1.5m & 1m lengths) & delivered for free, all at a fraction of the price at the DIY store! 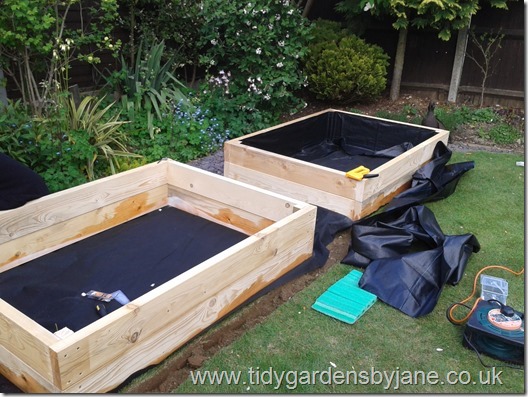 We were going to go 3 lengths high but decided at this point (above) that the sides were deep enough (approx’ 30cm / 1ft) and so the spare wood has been put aside for now. It took Mr TG and I an afternoon to screw all the lengths together, insert internal corner post & brackets for extra strength and then added woven polythene to the sides & a weed suppressant layer to the floor. 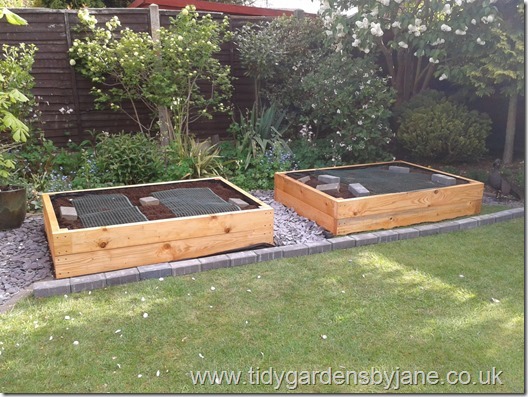 I then cut away the lawn from around the beds, added more weed suppressant material, fresh purple slate to join up to the existing pathways & laid a new line of grey bricks as an edge for the lawn mower to slide over. Mr TG gave the outsides a lick of shed treatment (which won’t penetrate through completely) to give it some protection from our British weather and added a trim to the tops of the beds to give the perfect finishing touch. 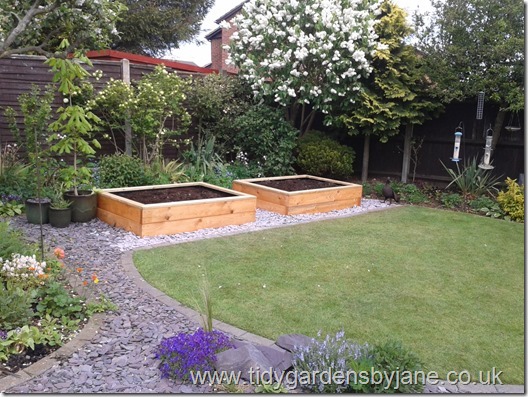 The lawn is now D-shaped rather than a circle but, if I say so myself, does look rather posh. There is enough room to walk all around the 2 raised beds & space to kneel to tend our crops…(Ha! Ha!) and the whole area looks like it’s always been there. 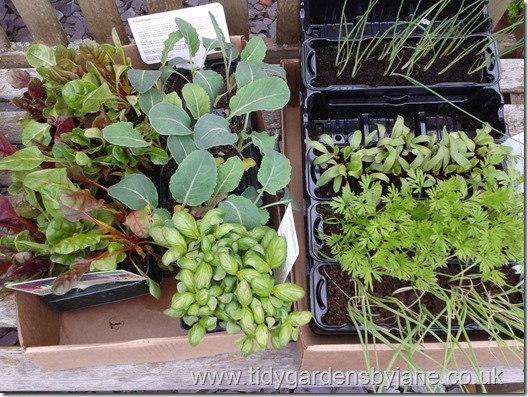 I did go out & buy a selection of seedlings to get us going as well as sowing some seeds direct too.
Above….Chard, Cauliflower, Carrots, Leeks, Red Onions, Basil & Beetroot. 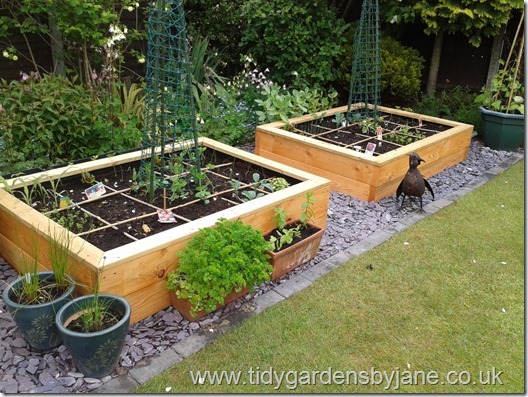 And here they are…our finished raised Veg Beds. They’re both 1.5m x 1m & 30cm high. Sections inside have been divided with garden canes and planted up. 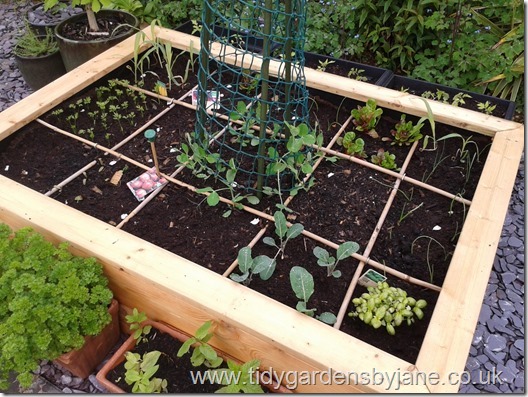 Our tomatoes are terrible this year…hope they perk up. Chives in pots at end (out of shot) 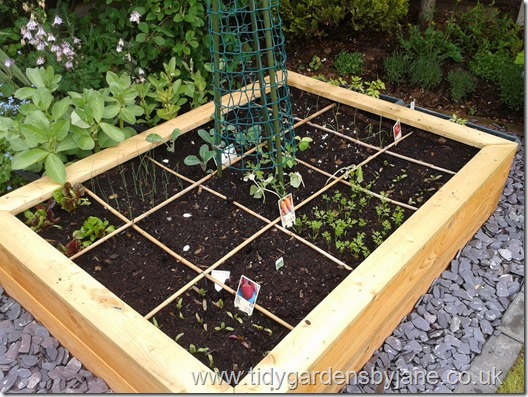 At the rear (in troughs that I’d planted earlier in the year) Broad Beans and at the end (out of shot) a large pot of Runner Beans. 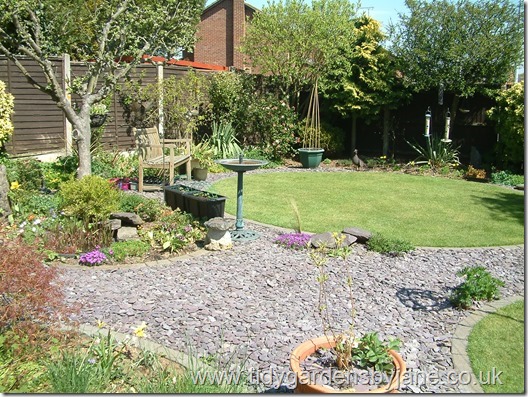 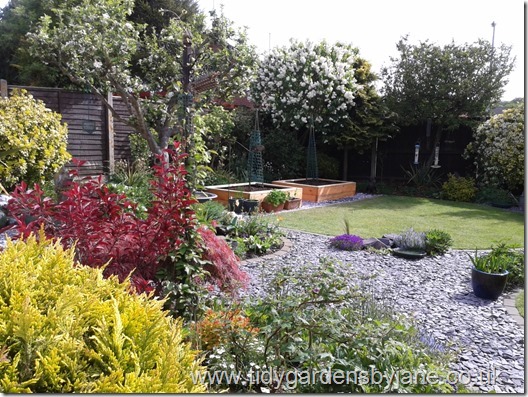 Mr TG’s as impressed as I am with our latest venture. It turned out much better than we’d both thought.
I’d like to say The Tidy Garden is now complete…. but you know me better than that….mwhahahaha!

Looks wonderful Janey and great veggie choices! Save a little space to plant garlic in the fall and your salad bowl will be complete!

They do look they have always been there Jane..what a lovely garden and the planter boxes just fit right in,with all those yummy veges.I'm digging up lawn at the moment around my fence line,edging with old bricks and planting agapanthus to try and stop the dog charging the fence to kill all other dogs that wander by..lol..

Well done to you and Mr T I love home grown veg we are only growing spuds, lettuce, radish and gooseberry's and rhubarb this year as the last couple have been fairly awful due to the bad weather, what's the betting we have a fantastic summer now we have not planted the usual veg. But love your raised beds. Love Alison xx

It is quite apt that you were attracted to the tidiest form of vegetable gardening ever! (My veggie garden, of course, was built in a loose C-shape and promptly turned into a jungle in which one had to brave all sorts of wildly waving vines in the hunt for edible treasures.)

Your new beds look beautiful, delicious, and, of course, very neat and tidy!

Those raised beds are snazzy, Jane! You two did great. Raised beds like those in "The Tidy Garden" just went on my wish list.x :-)

I love it, in fact its the tidiest veg growing patch I have seen.

Great job! I like the d-shaped lawn better than the circular one, in fact. I've read all about square-foot gardening and even made some plans once, but the timber for raised beds is just too expensive her, so I never followed through. I'm impressed.