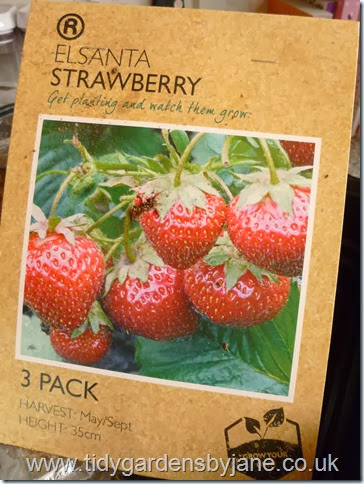 The excitement of the new greenhouse is yet to wane.
In fact I’m starting to run out of excuses to ‘pop out & check something’.
Mr TG has a photo of me by his desk to remind him what I look like, having mistaken me for a burglar fondling his ‘smalls’ on the washing line, and I now wear a badge so the TG offspring can recognise me when I’m tucking them into bed. 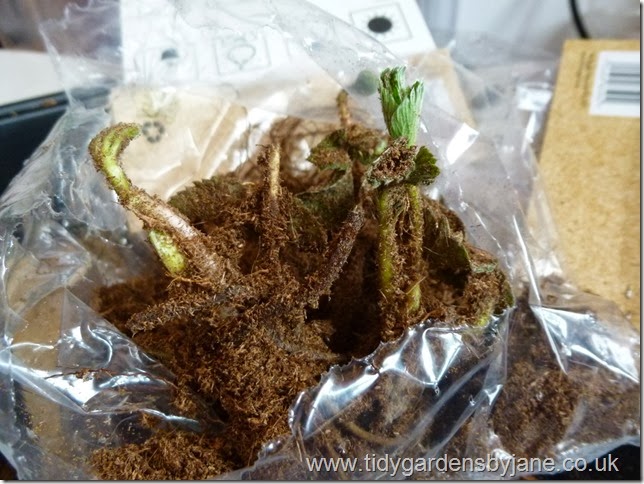 In order to gain some brownie points with said offspring, I’ve bought strawberries. I’m having a go at bare root strawberries bought from The Range. They had 3 varieties to choose from priced at £2.99 for a pack of 3 or 4 packs for £10, so I bought 4 lots of the Elsanta variety which is a mid-season fruit. 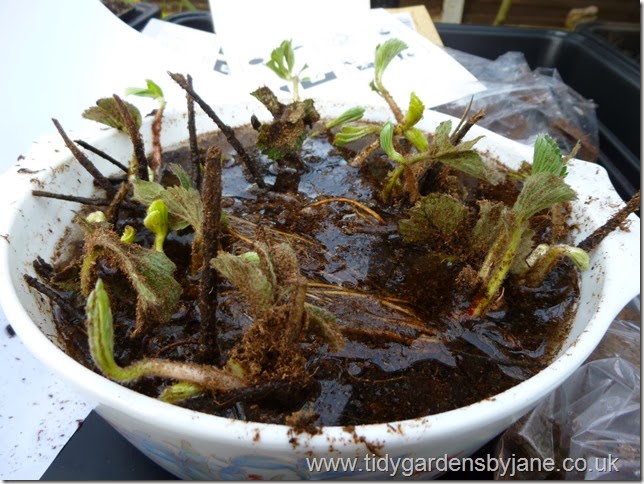 I left them for an hour or so, in my ‘bestest’ casserole dish, to luxuriate in warm water which helps to rehydrate their rooty limbs. 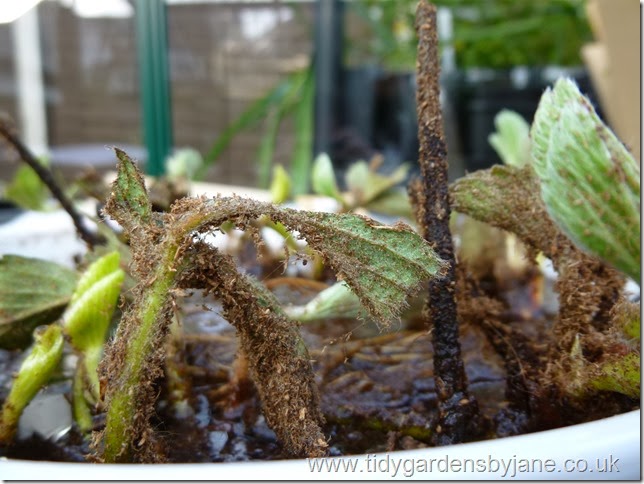 Then potted them up, leaving their crown above soil level (the crown’s the bit where the roots stop n’ stems start). 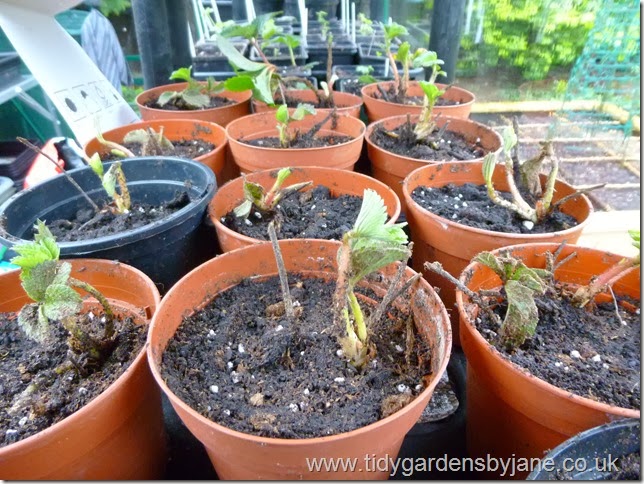 So I now have another reason to ‘just pop out & check something’ in the greenhouse, which is where they’ll stay until a) they start to spring to life, b) I’ve decided their final destination c) Mr TG discovers my whereabouts.
What I’m pondering is somewhere to plant where those damned vine weevil can’t get at them. Our current crop, despite regular treatments with Provado, has now been disposed of. I checked them again last week & they were absolutely riddled. Someone suggested a display stand where the legs can stand in water trays which stops the vine weevil reaching the strawberries. Now I need to invent such a stand.
Hmmmmmm….I need to think…..hmmmmmmm.
Off to the greenhouse, yell if you need me!
Pssst!
Before you go…I found this…..
Gardeners’ World & D.T. Brown have a special offer.
*24 strawberry runners - 12 early-season Honeyoe & 12 mid-season Cambridge Favourite*
Just pay the postage of £4.95 by entering the code GD14FEB at the checkout
Now go!
Posted by Jane

I have been thinking of ordering bare root strawberries, but have never done this before, so thanks for your tutorial. Of course, now you've also got me worried about the vine weevil! I laughed out loud at the thought of you wearing a badge to tuck the children into bed! :)

I agree, only your bestest is good enough for Strawberries, Hope you are rid of the dreaded vine weevil.

Strawberries and cream, I see a a scone in their somewhere as well. the only things that have bare roots in my garden are the weeds.lol. Love Alison xx

Ha, my family has learned that during the warm months if they can't find me, look outside. Oh what havoc on my poor family a greenhouse would cause!
I hope you can keep your poor strawberries away from the vine weevil. I have some strawberry plants awaiting in my garage that I'm going to have to figure out how to get in the garden without all the wildlife getting - though thankfully I think most of my problems can be caused by fences!

I had my strawberry obsession some years ago, and last year I gave all my plants away as I didn’t really have a good place to grow them in my rather shady garden. They now have a good home down in Kent, all 24 of them and they keep making new plants to replace the old ones every year. I suppose some of the oldest of mine are due for the compost heap by now as they really don’t last more than about 5 years from baby to geriatric plant.

Have you tried vine weevil nematodes? I use it twice a year and it has been fantastic in my garden. I buy them from Amazon and as long as the soil temperature is above 5 degrees C for the following 14 days you can treat the soil. In the greenhouse you can treat all year round. For around £20 twice a year it is an expensive treatment but I would rather have a few less plants and peace of mind – and it is so easy! This is the one I have used, plenty enough for the whole of your garden, not just your pots, I treat mid March and mid October here in London: http://www.amazon.co.uk/Nemasys-Nematodes-Vine-Weevil-Killer/dp/B000VPESY8/ref=sr_1_1?ie=UTF8&qid=1392076197&sr=8-1&keywords=vine+weevil+nematodes
I dilute it more than the recipe for easier application on the whole garden, let me know if you need the ratio.