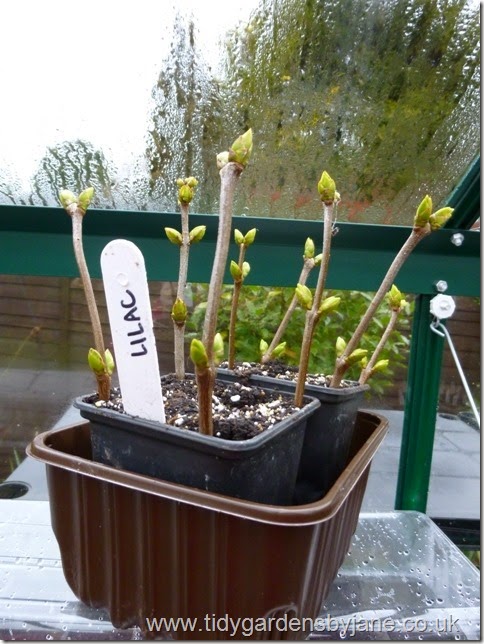 Last month I wrote about the lilac tree (Madame Lemoine) and the branches that I’d had to cut off in December of last year prior to the arrival of the greenhouse. I’d chucked them on the log pile and thought that was it. 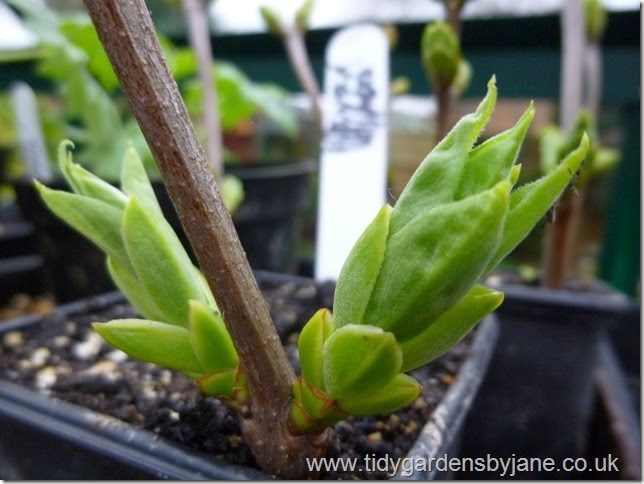 However, in February I noticed green leaf buds forming. The stems weren’t in the soil, they were still on the top of the pile, they’d just been lying there taking everything our weird British winter had thrown at them. So I rescued them, cut the stems into 12” lengths & poked them in 2 pots & put them in the greenhouse. 1 month on and what I thought were leaf buds have now swollen to reveal flower buds. I’ve tipped the plants out to see if there are roots but nothing…nadda…nowt.
I’ve googled to see if anyone else has had similar experiences but I can’t find anything. Somebody mentioned that roots can take a long time to form but I would have expected roots before flower buds. 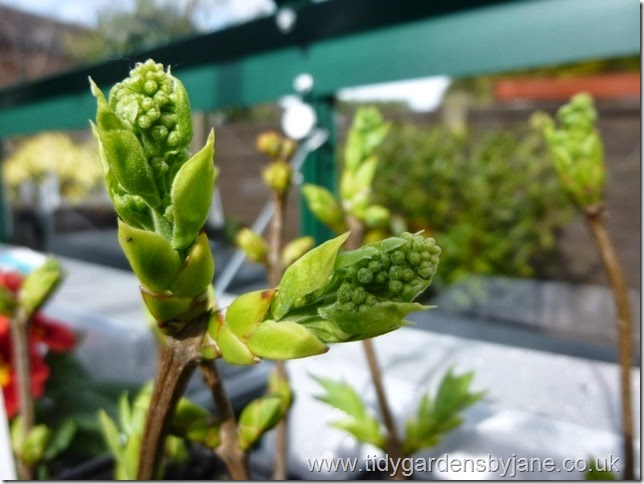 I’ve been misting them once a day to help with their moisture intake but I wish I knew their fate. Is this all too good to be true? 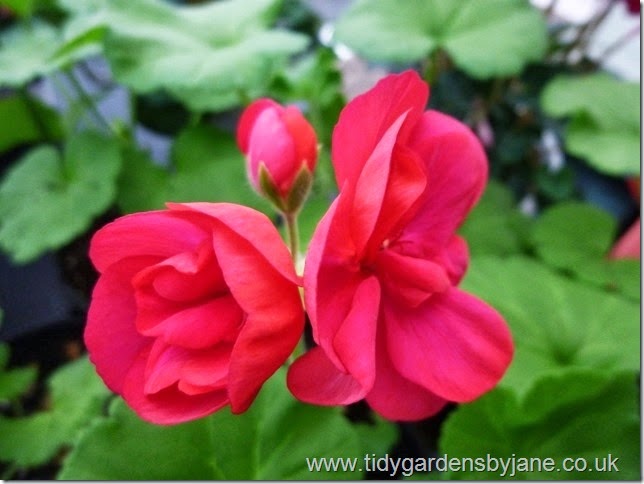 Meanwhile my pelargonium cuttings from last year have been blooming away and they’re now providing further cuttings to grow on. I snipped off the flowers & put them in a vase expecting them to wilt within the hour. 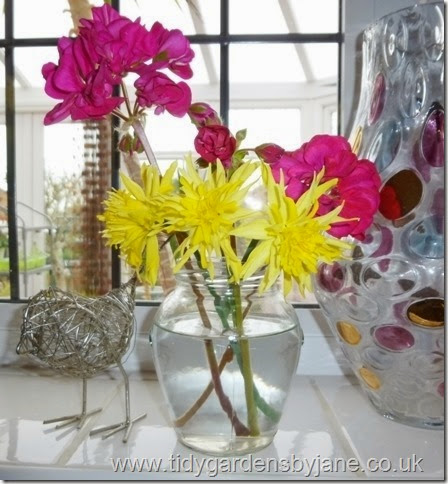 This photo was taken last week.
The pelargoniums had already been in the vase a few days before the Rip Van Winkle’s were added.  The daffs’ only lasted about 3 days but the pelargoniums are still going. 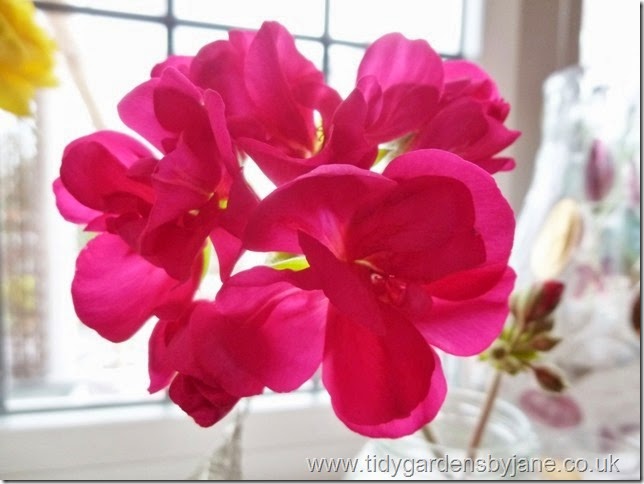 Just over a week has passed and the remaining buds have opened.
Pelargoniums as cut flowers?Weird…but yes.
Posted by Jane

Email ThisBlogThis!Share to TwitterShare to FacebookShare to Pinterest
Labels: Summer

Oh, I remember the lilac from a previous post Jane. I do hope they eventually root. I think it's odd too that they will flower. I'm keeping my fingers crossed for them.

It sounds like your lilacs are being 'forced'. I have a big watering can full of water and citrus soda (the beverage - like Sprite or 7 UP) in front of a bright window in my basement (like a cellar but more finished)that are doing exactly what your lilacs are doing. I pruned my lilacs in late winter so I wouldn't have to worry about insects attacking a large cut and moved the branches inside. They've put out leaves and flower buds but will die eventually without setting any roots. By forcing them I could enjoy the flowers from the pruned branches. But maybe if you dip your stems in a rooting hormone, they'll set roots!

Wow, that is too funny! I once had some pruned limbs from a cherry blossom tree start budding and flowering. I stuck them in water, half hoping they would root, but to no avail. They were rather large limbs, so I would have been surprised. I hope yours take root, though! Some tough lilacs!

Jane, that is weird and definitely wonderful. Folks not into gardening just don't know what they are missing.

I think rooting hard wood cuttings can take up to a year, but as long as the cuttings have enough water and are kept out of strong sun I think they will be OK. Misting them will help too, although look out for fungus growth if you keep them in the greenhouse, you might want to move them outside soon instead. I hope you succeed, it’s so much more rewarding making your own plants than just buying one from a garden centre.

I have a lilac growing in my garden that I have grown from a tiny cutting. It is now about 5’5 tall and it has taken 10 years to get to this size – but I think mine is a slow growing type, it is probably a Syringa komarowii reflexa, not entirely sure as I have had to find the name using photos on Google.

You obviously do have green fingers - hope the cuttings finally produce roots - you could have a long wait though.