I’m not sure I’ve ever blogged about our front garden before. 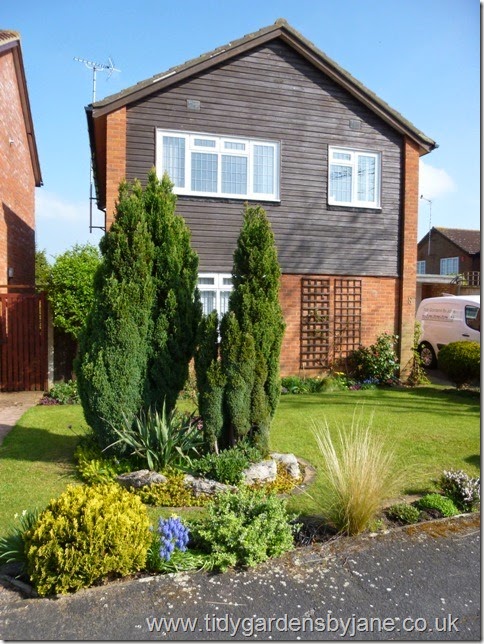 Probably not….at the beginning of last year it was…well…boring.
There, said it….boring. Boring… but tidy.
The bed under the windowsill was a Euonymus hedge…..yawn…but last spring out it came & a floral frenzy was planted. 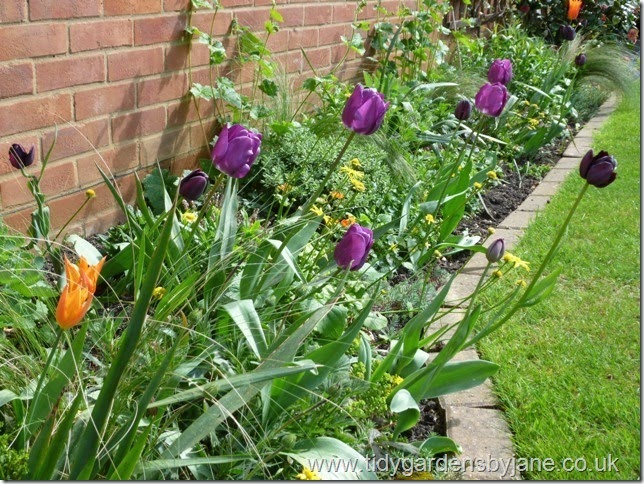 There was , however, one part of the garden that we’d never touched. 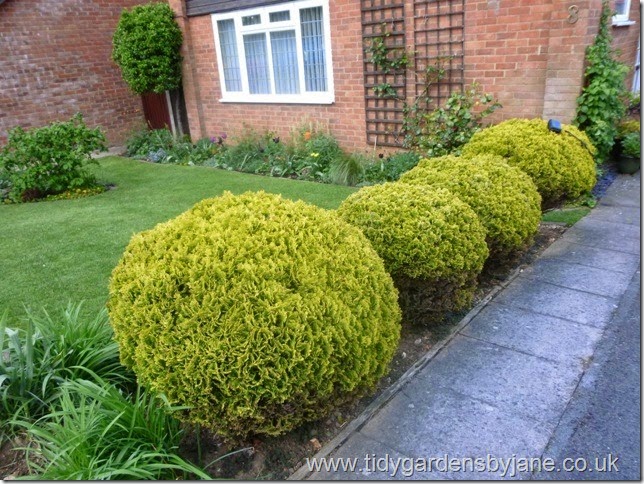 The pathway down to the house was lined with large conifer balls and they bothered me.
They’d been planted by the previous owners, we’ve lived here for 16 years & just lately they’d started to look tired. On further investigation it appeared that only the final inch was actually green & their bottoms were positively dead, probably helped along by passing male moggies. 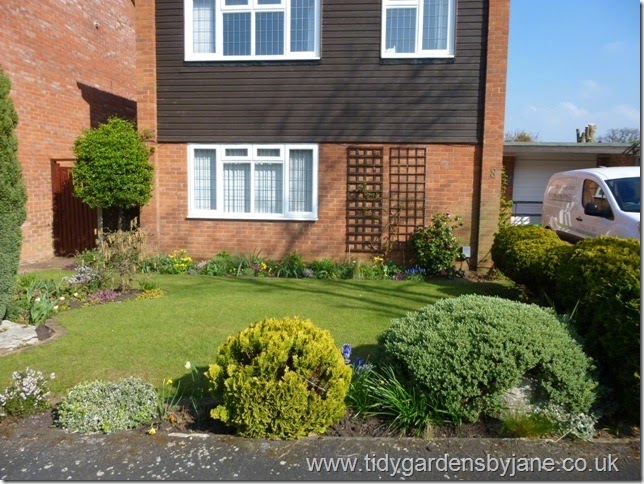 Having convinced Mr TG how much more beautiful another floral frenzy flowerbed would look, it was agreed that the balls would go & the bed would be redesigned.
Armed with a variety of saws, loppers, forks, spades & a pick-axe (Mr TG’s tool of choice), the conifers were removed, as well as a couple in the border along the main path, an overgrown Hebe, a hideous Aucuba and a spindly Camellia.  A visit to my favourite plant suppliers followed & a whole heap of gorgeousness purchased. 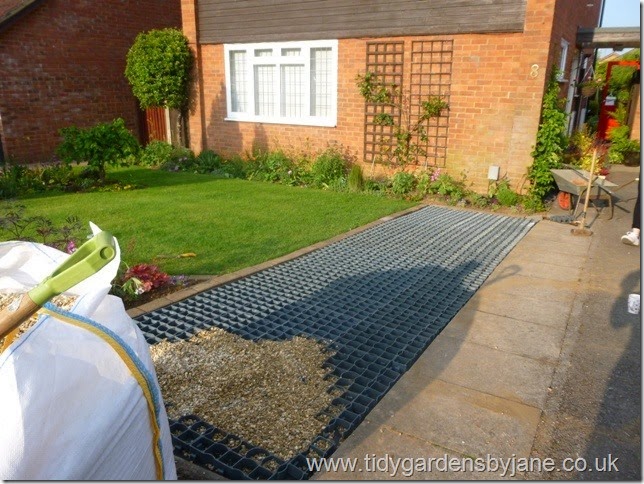 It was at this point that the plan changed.
As I stood trowel in hand, surrounded by bags of fresh compost and plants eagerly waiting to be planted, Mr TG spoke.
”Flowerbed or additional parking?” he said.
Huh? I replied.
”Flowerbed or additional parking?” he repeated
”Where the heck….” (this is the polite version)…”am I gonna put all this lot?” I replied in an oh-so-lady-like way.
”Sell it!” he suggested, clearly unaware of the ‘bond’ the plants & I had already developed.

With our daughter fast approaching her 17th birthday (I know…. how can I still be 21?!), Mr TG pointed out that maybe, just maybe we ought to consider more parking spaces should fav’ daughter get a car one day.
My suggestion of a multi-storey car park to the side of the house was quashed within micro-seconds.

So here’s the result…. we dug out a couple of tonnes of soil, re-filled it with hard-core, covered the area in driveway membrane, laid plastic, porous paving from Ecogrid, filled with shingle and edged with block paving. 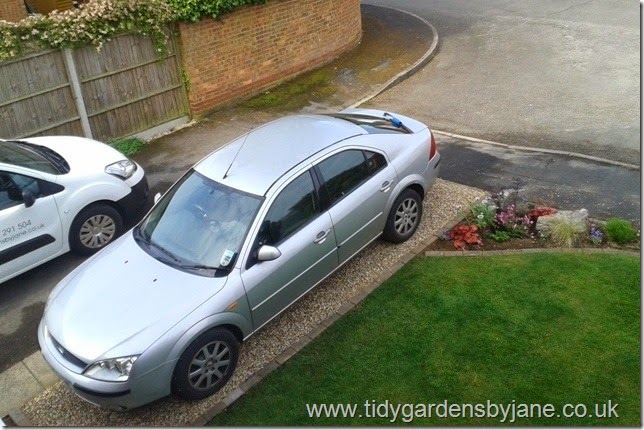 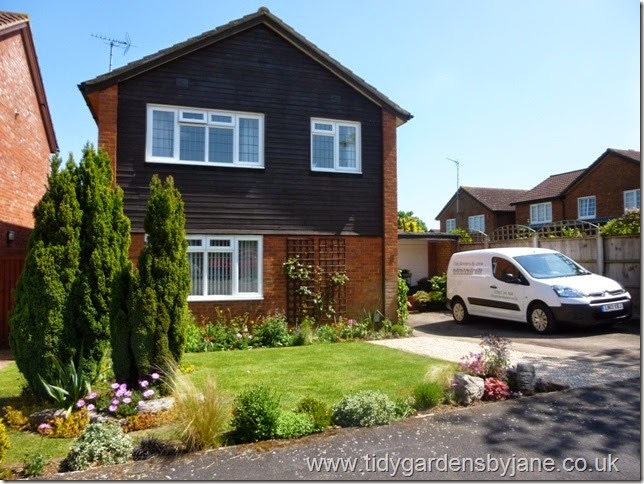 Not sure we will be taking up a career in driveway creations…. bloody hard work. 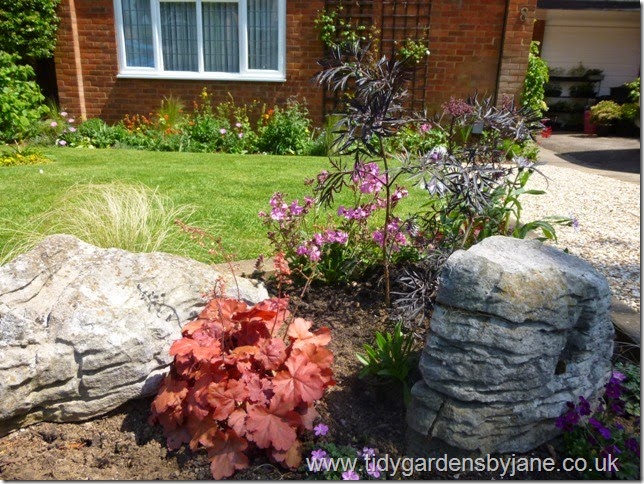 A new corner bed for a few of the plants I’d bought.
A Heuchera ‘Cherry Cola’, Sambucus ‘Black Lace’ which will be architecturally sculptured (sounds fancy ay?), Centaurea ‘Purple Heart’ and a pink Silene. 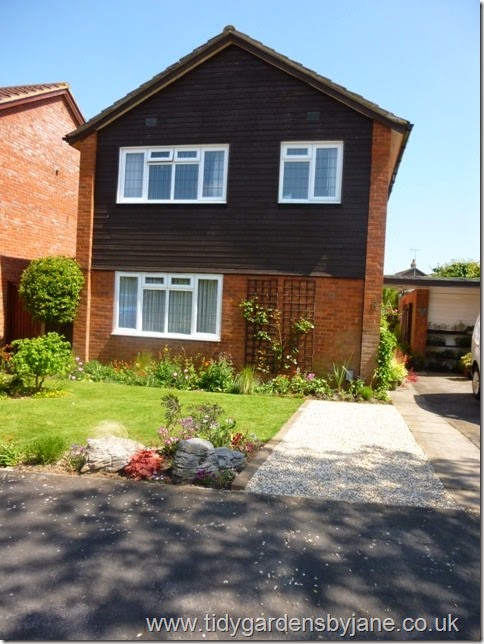 Job done….and if I may be so bold…a flamin’ brilliant job done.

Email ThisBlogThis!Share to TwitterShare to FacebookShare to Pinterest
Labels: Heucheras

Fantastic job Jane and so worth all the strained muscles and bleeding hands [or is that a bit exaggerated]a perfect parking spot and the front yard still looks beautiful..

well done you two - a great improvement on the conifer balls - it's funny how people hardly ever blog about their front gardens - I don't either, not sure why. Have a great weekend if it's not too wet!

I think you made the right choice, too. :o) My daughter is getting a car soon, but can park it on the street here. But American streets are so much wider than those in the UK. Love the new corner bed and the fact that you chose porous paving materials!

I agree, flamin' brilliant job! Now, when and what car are you getting for your favorite daughter?