And the ‘Patience Award’ Goes to…. 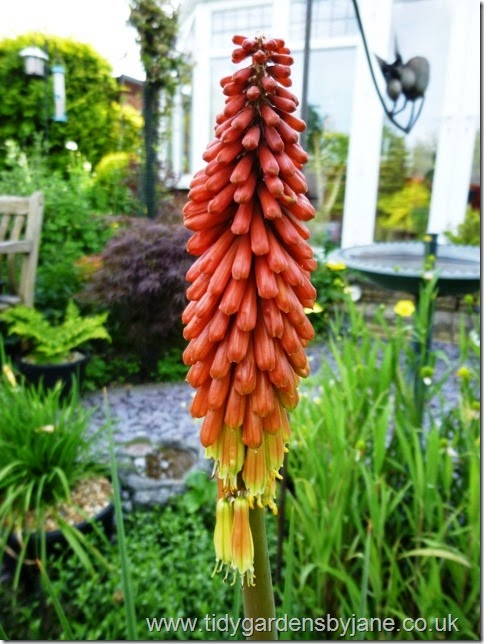 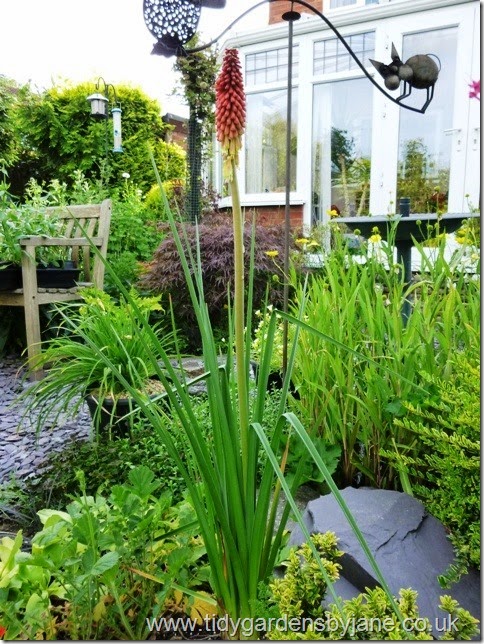 This is a Kniphofia, or Red Hot Poker…..but not any ol’ Kniphofia.
No! This one, we reckon, is about 15+ years old.
I seem to recall buying it in the late 1990’s (so last century) and it was planted at the end of the garden. After several years it became apparent that it wasn’t happy, barely able to produce a new leaf let alone a flower.
So it was dug up & put in a huge pot on the opposite side of the garden where its performance ‘vastly’ improved with the appearance of 2 or 3 leaves. (Exciting huh?)
Last year I decided enough was enough…sheesh…I’m a patient woman but c’mon! 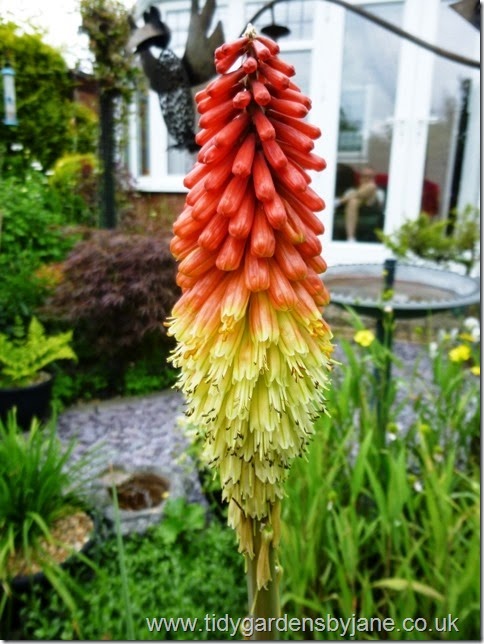 I dug it up again, planted it back into a tiny pot and left it up the gloomy, north facing alley running up the side of the house to have a good ol’ think about its behaviour & future in the Tidy Garden.
1 year later I decided, because I’m a generous soul, to give it one more chance and this time planted it among Mr TG’s beloved Geums in the Apple Tree bed.
Ta-Da!
Excited?
I liked them in the 90’s…..

*** It appears that Blogger is playing up and comments I’m leaving on certain blogs are disappearing, so if I usually visit your blog then rest assured I am leaving comments but Blogger is choosing not to publish them***

Oh, I have tried to have Red Hot Pokers in the garden, but have never had any luck with them! More than one has been thrown out of my garden due to bad behavior. However, I was never as patient as you, and has it ever paid off for you! What a unique pop of color in the garden (love the beautiful photos)! If I ever get another Red Hot Poker (I probably will like the plant addict I am), I'll just move it around until it decides to be happy. I enjoyed your lovely post (made me laugh). All the best! :-)

On our recent trip to England we saw red hot pokers in gardens large and small. My husband fell in love with them and desperately wants some for our garden. Usually (always) it is me in must have mode so this makes a nice change.

You really are patient - I tried with these once but they just disappeared along with many other plants I have tried. They used to be a staple in gardens but seem to have gone out of fashion - now we know why.

Hmm. You're patience is humbling Jane(if slightly barking - but then I don't much like Kniphofia. Sorry). I'm hugley gratified to be a Groovy Blog. That's like well wicked sick. Innit? Dave

Phew, what patience. I'd have got rid of it long before now!
Well done fussy Kniphofia!

Patience is a virtue and your reward is absolute beauty!

I have a penstemon that did the same thing! It bloomed this year for the first time in about 5 years! Of course, this was after I had chucked into the waste tub and then pulled it out when it had the nerve not to die. :o) Love your red Hot Poker!

I've heard of other people having trouble with them (which is probably why I don't grow them - plants are rarely babied in my garden!) It looks gorgeous in flower, though! Here's hoping you don't have to wait another 15 years until the next round of flowering...