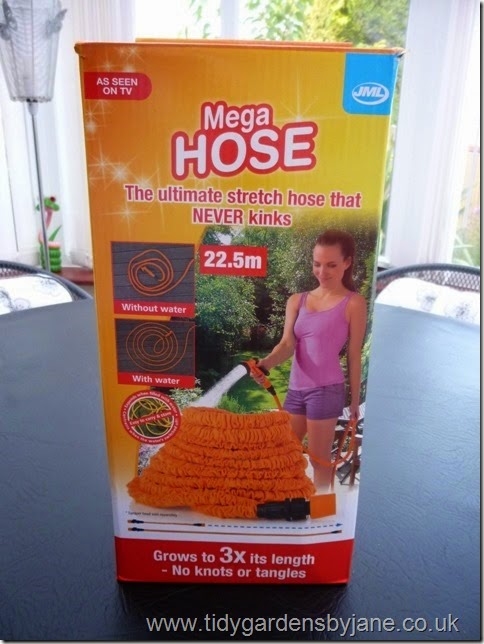 The good people at JML recently asked me to trial, test & review their newly released ‘Mega Hose’.
Having already bought a similar product by a different brand earlier this year, that exploded on its second outing, I admit I was a tad sceptical.
The JML Mega hose comes in 4 lengths, 7.5m, 15m, 22.5m & 30m.
I tested the 22.5m length hose which is about 74ft for you ol’ school types. 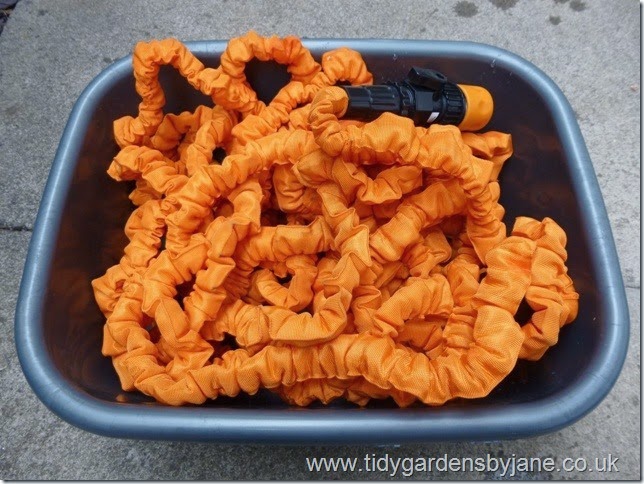 As you can see above, it fits neatly into a washing-up bowl when ‘limp’. Of course, if you have a dishwasher or ‘staff’, then you’ll have absolutely no idea what a washing-up bowl looks like.
The box contains 2 tap adapters (3/4 inch & a 1/2 inch) & 2 spare washers…and the hose! 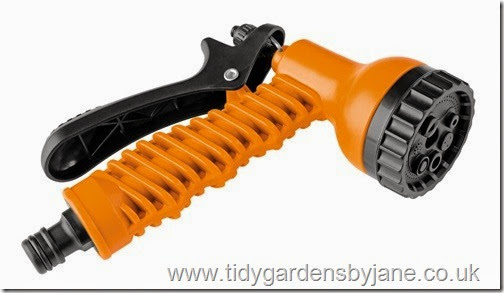 What it doesn’t contain is a Hose Nozzle.
The instructions inside ‘highly recommend’ that you use attachments specifically designed for the Mega Hose, so I don’t know why their Nozzle doesn’t come as standard in the box. I have 3 nozzles from other hoses I possess (am I a hose-a-holic?) and the only nozzle that fits perfectly came from my deceased exploding hose. The other 2 (from a well-known hose retailer) didn’t not fit securely & leaked dreadfully.

Here’s me (I wish!) watering the garden.
Using an innovative expanding inner core and a super-durable outer flexible skin, the Mega Hose will start small but apparently grow to over 3x its length when you turn on the water and when you turn the water off & it should shrink back to its original size.
Now I measured mine in it’s shrunken state & it was 13m long. With the water on full blast it reached 22.5m (an extra 9.5m) but definitely not 3x it’s original length as claimed on the box. Maybe just sticking to detailing the length it reaches would have been a better claim on the packaging? At 13m long in its shrivelled state, one still has to retrieve it from around the garden as one doesn’t have a butler.
I also collect it up in a way that the water drains from both ends & then if it’s got a bit wet or grubby, I hang it on the end of the washing-line for a while to dry before stashing it away in its washing-up bowl.
The Mega Hose isn’t heavy, doesn’t get tangled or kink.
It claims to slide around trees and other obstacles but I still find myself occasionally having to give it a tug around some pots & benches and did manage to knock a pot over as the hose went under rather than around the pot as I pulled. Maybe it’s because our garden is part slate & grassed areas instead of shiny tiles or smooth decking sections (hmmmm….I don’t know).

So in summary what do I think?
Well it’s been used lots and it hasn't burst!

I like that despite it’s vast length, it does move around the garden fairly smoothly (needing only the occasional tug), there’s no ‘whipping’ at the hose to follow you, it does go where I go. Rigid hosepipes on reels sometimes want to loop or curl upwards (you know what I mean). The Mega Hose remains on the ground.

If you have a traditional hose, where you wind it back in on a wheel afterwards, that’s been dragged around the garden whilst watering & gotten a bit grubby, then it’s fairly easy to wind it in without touching it. The Mega Hose still needs collecting up by hand & can get quite grubby.
However, if you don’t have the winding mechanism for reeling in your traditional hose and have to collect it up, then the Mega Hose is far easier to gather, it’s incredibly lightweight, easier to store & takes up much less space.
The only real disappointment was the lack of nozzle. On the JML website, prices for the Mega Hose range from £19.99 for the 7.5m to £64.99 for the 30m length.
Whatever price you pay I think that the recommended hose nozzle should come included as standard. I’d have been pretty miffed if I’d returned home and none of my 3 nozzles had fitted & I’d had to go back out & pay an additional £9.99 for a separate nozzle.
Available from JML Direct, Asda, Homebase and Dunelm Mill.
I hope you found my review helpful.
PS. Mr TG said that he’s more than willing to test, review (and keep) any new cars about to hit the high street, preferably a Lexus or a posh Volvo

Hi Jane, Thanks for the review. We have the same style hose and it did good all summer but has recently started leaking. I don't know the brand name but do find it much more convenient than the old style hoses. I'm interested to see if your new one holds up.
I'll keep my eye out for a trial on a nice car for you and if you hear of a summer home that needs trying let me know....preferably by the sea!

Thanks for the review now I'm off to question the staff as to what a wash bowl is!!

I have looked at these and wondered if they work, so thanks for the review ! I still use the 'old' stiff and creaky sort, which is on EVERY blog photo, as it is too cumbersome to roll up.
The only thing that puts me off is that it did remind me of intestines when it was all coiled up in its washing up bowl! Sorry :-)

Interesting, as I've been looking at these hoses for a while now but have been put off by the reviews of them splitting and bursting. I'm not sure I'd fancy having to pick it up once it was wet and grubby either :-/ . Thanks for the review.

Excellent review, Jane. And my husband and I love the postscript. P. x

I have heard about the ‘exploding hoses’….and haven’t invested in one yet. My issue is that I use my hose both in the front garden and the back garden. In the back it would probably be excellent, but my tap is at the back so when I water the front I connect the hose, walk the hose through the back door, through the kitchen and the hall, through the front door, place the hose in one of the containers and then go back and turn on the tap. When I am finished I do the same and coil the hose up while holding the wet end upwards so not to spill any water on the floor inside. I have no idea how I would do this with an expanding hose, I have visions of an expanding hose whizzing back to its shorter shape whilst spraying my hall and kitchen with water on the way!! So I haven’t bought one. Yet. Seems silly to have an ordinary one for the front and an expandable for the back, I usually water everything once I get the hose out anyway. But I am still thinking of it so if your hose is still alive this time next year I’d love to hear about it.

Oh, by the way, even though I do have a dishwasher I know what a washing-up bowl is – I use mine in the garden, to collect dead leaves and flowers, perfect size!