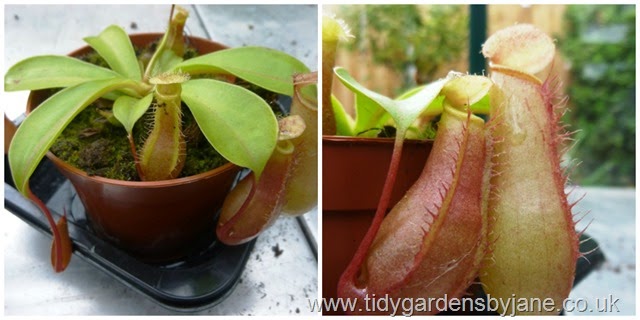 Let me introduce you to the latest additions to our greenhouse carnivorous collection.
Regular stalkers may recall my earlier post when ol’ Monty featured some on GW and got me hooked!
This is a Nepenthes, just a baby at the moment, but already it’s developing some handsome critter-luring pitchers at the end of each leaf. 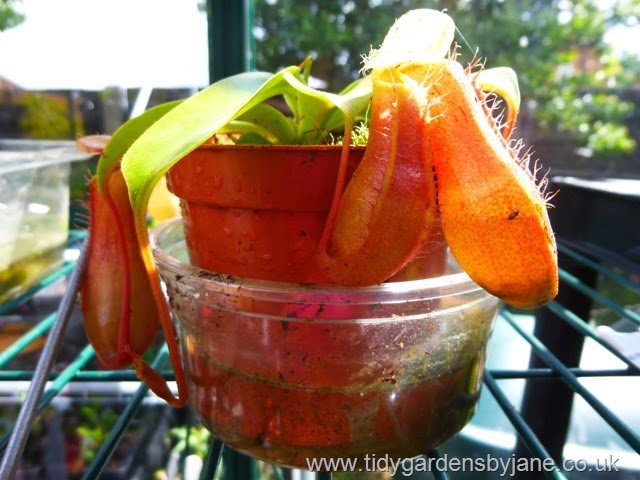 It entices its prey in with its nectar odour and, unable to hold onto the interior walls of the pitcher, the bug falls into the pool of water at the bottom, its wriggling sets off the plants digestive acid release and…well…that’s it….. 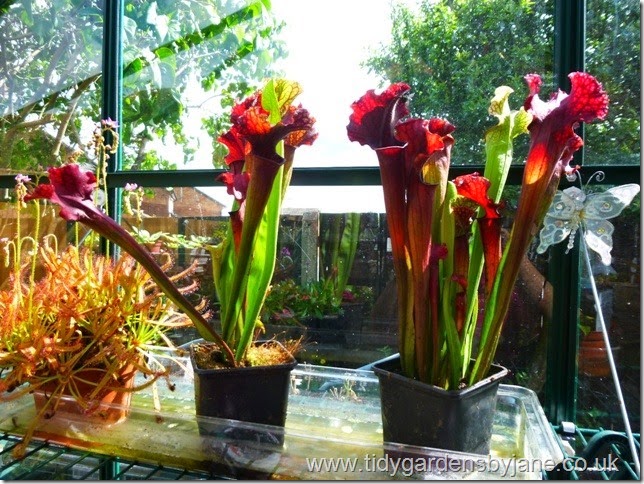 This is my original that I’ve now split it in 2. 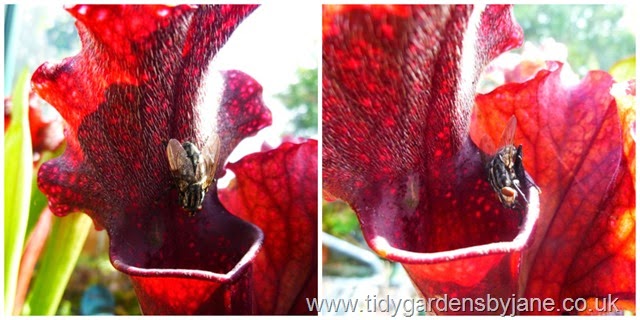 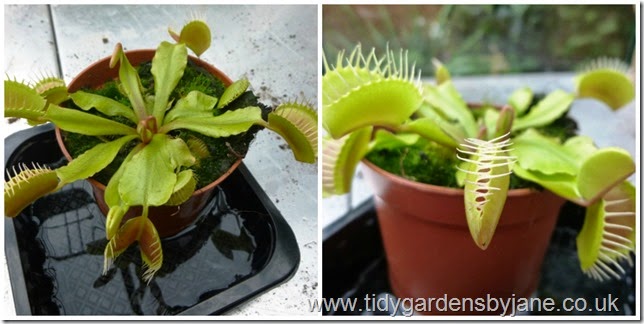 I’ve always wanted one of these but the poor things are normally on their last legs in the garden centres where they’ve been poked & prodded day in & day out with no sign of a real meal. 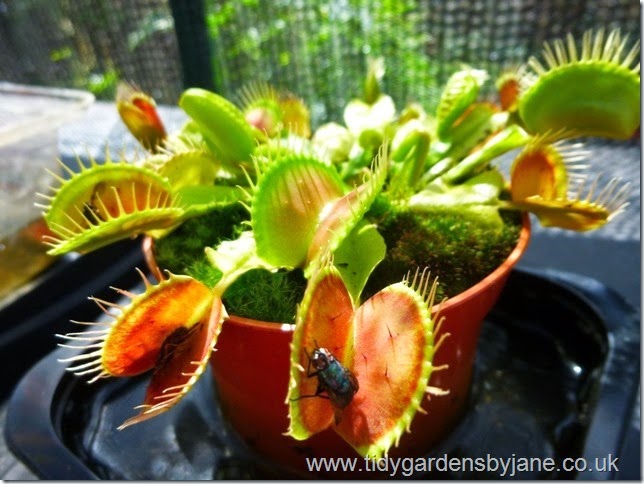 There was a fresh batch in the day I finally bought one.
No artificial poking from me…just a regular supply of unwanted greenhouse visitors to stop its plant-like tummy from rumbling. 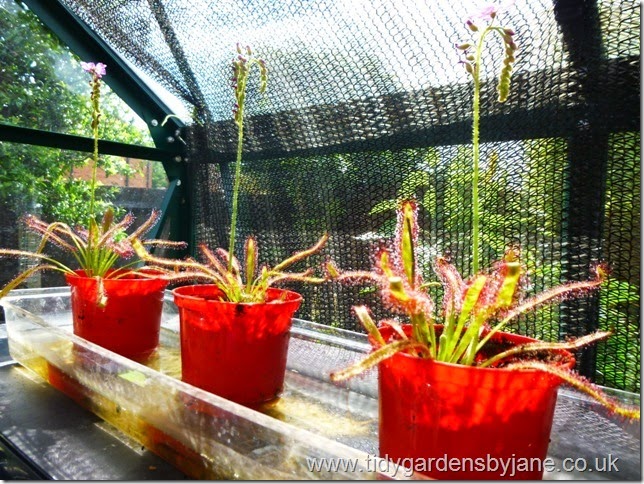 A fresh lot of plantlets from my original sticky Sundew and they’re so quick to flower. 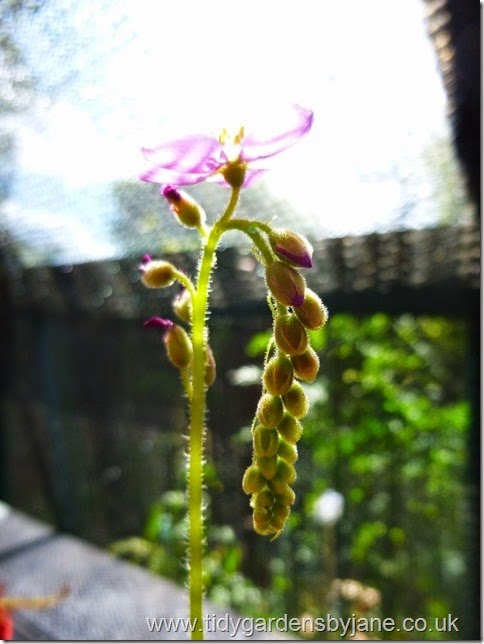 Such a dainty flower for such a murderous plant.

Now this one’s rather bizarre. 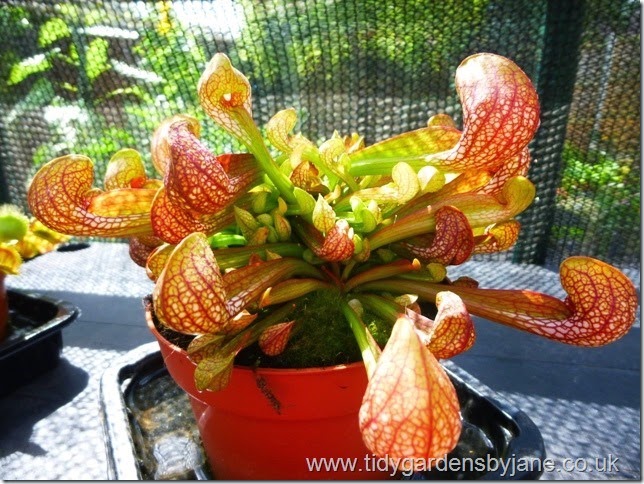 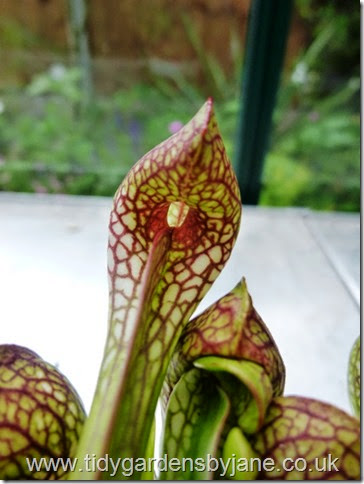 You might just be able to see the small hole where the leaf furls upwards. Apparently it’s normally found in flood prone areas in the hope of a passing fish or tadpole deciding to investigate the hole a tad closer. 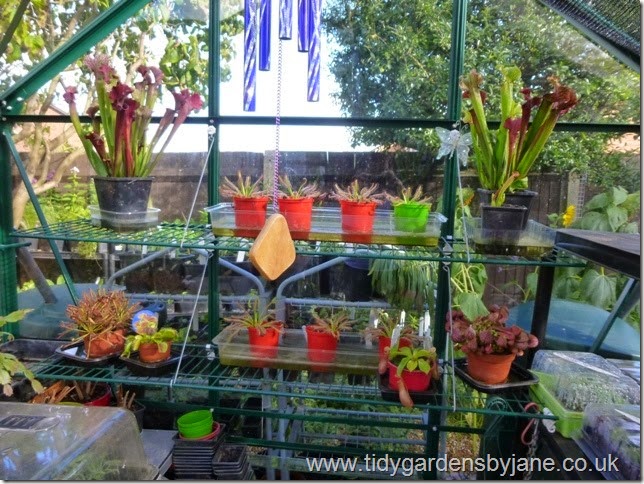 Email ThisBlogThis!Share to TwitterShare to FacebookShare to Pinterest
Labels: Carnivorous

Oooo, love that Parrot Pitcher! What a great collection! I have a couple different types of pitchers in a pot. I'd love to get more! A great collection to take care of any pesky bug problems in the greenhouse!

A-mazing! Hard to believe something so murderous could be so well, nasty!

I'm blaming the horses next door, or rather their manure pile for all the flies I get in summer. I had never thought about using plants for fly control, what a great idea.

You have a pretty collection of carnivores, the Sundew has a wonderful flower and your Trumpet Pitchers, great.... I wonder if it is difficult to keep them and I suppose your greenhouse is heated to may be 10 degr.C.?

Oh, I have wanted some of these ever since I saw them on an RHS exhibition in 2004 – but without a greenhouse I can’t see how I could keep them. My living room is terrible for plants, and my kitchen is full of orchids. I need a greenhouse! Your collection is lovely, I would have had them all :-)